Here is the news letter published by iSimangaliso the gaurdians over the St Lucia Wetlands Park. It seems that even though the wrecks are outside the MPA they still have say what goes down. Its a damn disaster if you ask me.
Coatesman
Turning disaster into opportunity 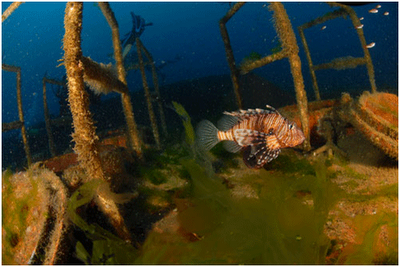 Shoals of fish have homed in on the DAR 2

The barges were wrecked on the beach 7km north of Cape Vidal - one of the most popular holiday hotspots in the iSimangaliso Wetland Park - on October 21 after their tow lines snapped.

The Park was facing a disaster. The barges were marooned on a rocky beach in the Tewate wilderness, not accessible by road, and within the Marine Protected Area (MPA). Apart from environmental damage, like risk to turtle nesting sites and possible damage to King Oscar Reef, they threatened the Park's rarest World Heritage values, it's 'sense of place'.

The beached barges were declared 'constructive total losses' by the owners. The owner's insurance cover was only sufficient to cover salvage costs if their removal by refloating and towing was completed quickly and efficiently. The available insurance would certainly not have covered an expensive and environmentally damaging wreck removal should they have broken up on the beach from the buffeting tides and wave action.

The Abu Dhabi-based owners and their Canadian agents showed signs of abrogating their responsibilities as it became imperative and urgent to remove the barges out of the MPA. First there was consultation with Ezemvelo, iSimangaliso’s conservation managers, and other parties.

The owner's agents then confirmed appointment of a salvage team with SAMSA, the SA Maritime Safety Authority.

Independent environmental assessments were undertaken resulting in a technical report involving 13 specialists. These included an assessment of requirements for scuttling vessels and best practice review for establishment of artificial reefs according to the recent July 2008 London Convention and Protocol/UNEP guidelines to which SA is a signatory.

SAMSA then directed a salvage company to remove DAR 1 and DAR 2 and scuttle them at approved sites under the Wrecks and Salvage Act. The Department of Environmental Affairs and Tourism (DEAT) authorised removal and scuttling of DAR 2 at the approved site on November 5 and for DAR 1 on November 21.

DAR 2 disappears beneath the ocean

The bathometric sea floor survey identified a site about 2kms south of Cape Vidal and less than 2kms out to sea. This is outside the MPA, in an area zoned for open use. There are no natural reefs within 500m.

Before scuttling the barges, strict environmental conditions and pollution prevention measures were set. Pollutants were removed and objects like hatch doors were taken out to minimise flotsam.

Everything was done with written approval from DEAT, SAMSA and the iSimangaliso Authority, applying national legislation including the World Heritage Convention Act - and international conventions. Monitoring and strict control of this artificial reef site will be done from Cape Vidal.

DAR 1, which is 15m high, lies at 24m, ideal for first-level divers, while DAR 2 is at 36m. The Park's 220km coastline has hard coral reefs from Kosi Bay to Leven Point, 16kms north of Cape Vidal. In the south are rocky shores and flat rocky reefs. As diving is one of the fastest growing sports, a need has arisen for alternative sites to Sodwana Bay and other sensitive dive areas in the northern section of the MPA.

The newest dive attraction in iSimangaliso

The potential disaster of the barges has been turned into a unique opportunity, not only for dive tourism but for environmental, educational and research benefits. "

Cape Vidal is the Park's flagship tourism destination but until now has had no dive opportunities, with seasonal dips in visitors. There have been repeated requests from tourism product owners and visitors for a dive experience accessible from there. Except for good all-year visibility and ease of access, these reefs will be similar to those created by the Produce and Nebo wrecks near Aliwal Shoal off Umkomaas, and the T-barge sunk by ORI (Oceanographic Research Institute) off Umhlanga.

As the wrecks fall within iSimangaliso, legal mechanisms including a Park Area Notice are in place to ensure compliance. Fishing or spear-fishing are not allowed on or in the vicinity of the wrecks. The reefs are within sight of a controlled launch site and full-time Park compliance staff. A research and monitoring programme has also been tendered.

Head of research at the Natal Sharks Board, Geremy Cliff said the new reefs should have a beneficial role in reducing diver pressure on the Sodwana reefs: "But artificial reefs are known to be fish-attracting devices so they will need to be very closely monitored to ensure anglers and spear fishermen don't target them".

Kerry Sink, manager of the marine programme for the SA National Biodiversity Institute, shares this concern, "however if these relieve pressure on the natural reefs at Sodwana and diversify the dive experience at Vidal, then they have a role", she said.

Advanced diver and underwater photographer Dennis King was one of the first to dive DAR 2: "After just three weeks the whole deck is covered with algae and I counted at least 17 species of fish and shoals of goldies," he said. "With the barges 600m apart and close to Vidal this is going to be an exciting new place for divers of all qualifications."