This weekend saw some of the coldest water we have spearfished in KZN. On Sunday the water was a fridged 17 deg on the North Coast. The forecast looked good for Monday so we decided to extend the weekend and get away from the cold water by venturing to Cape Vidal with Koos Jordaan.

The water there was a bit water 21-22deg and we got some great Wahoo between 16-18 kg, some couta and a decent sized Cobia arround 18kg. Koos got a nice big Sailfish that was the cherry on the top of a great day.

Back home the guys dived the KZN trials on Sunday. Although the water was very cold at least it was reasonably clean. Gary Uys got a brilliant Kob, this with his 10 fish total gave him first place in the trial. Second was Sean Burns .. who was also diving with Gary! Do you think they found the fish??? I know some of the more competitive guys would have been pretty bleak at not placing well, especially since 'Burnsy's' competitive diving is strictly speaking a 'social' affair. ...... well so he says!

The results are as follows:


The next trials will be next year and probably on the south coast.

The weather and ocean forecast this week looks a bit bleak and it does not look like there is much chance of it warming up just yet.

And talking about cold and warm waters here is a segment out of the one fish film. The one section is in the Arctic circle with sub 10deg water and the other is in the Persian Gulf with plus 28deg water!!

If you cant see the Spearfishing Video - Go Here 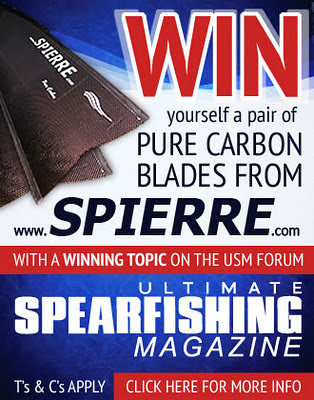 Conditions along the Natal coast this weekend were a bit iffy for spearfishing, although there was a dive to be had at most spots. North and south of Durban had some diveable water but it was not the warmest water and the od Garrick and Snoek came out here and there. Most guys were not complaining as they were happy to ad least get in the water.

Further up north the story seemed a little different. Ryan Berry an old time local at Sodwana went to test drive his sinuses after a recent sinus op.  It seems all went well with good fish speared and sinuses ok.

Other news is that Brod put up his short documentary on the  Euro Africa Spearfishing Championships this is definitely worth a watch ... give some good insight into how tough it really was.

The Ultimate Spearfishing Magazine and Spierre fins have also started a competition on the USM Spearfishing Forum where you can win a pair of Pure Carbon Spearfishing Blades from Spierre.
All you need to do to win is start a "Hot" topic on the forum and the one that gets the most action wins.

So even if the water stays cold at least the forum will be heating up this month.