Spearfishing this weekend was fairly good all along the coast, the north coast was very clean. The swell picked up a little making the diving a little challenging in the shallows. The game fish were fairly quiet with the odd report of snoek coming out at various spots. Some guys did not see any fish tho ... and it seems like there were a few large shoals of fish swimming up the coast and those lucky enough to bump into the snoek came right.

The Garrick also started to make an appearance, with reports of large shoals coming past some of the points. The water was a bit clean and few of these fish were speared.

I joined a mate and took my lighty far north for a shore dive. The swim out in the swell was interesting but he managed none the less. The surge ment that we had to dive fairly deep .. for him atleast. We found some good reef in the 10 -13m depth that was no effected by the swell too much.
Braiden managed to get some good fish including a snoek and Catface Rock Cod. I landed up with 2 snoek not too bad, but if you consider that we dived for over 4 hours it was a bit dismal.

Further down the coast the guys dived the HUC Gamefish Open, Darrell sent through this report:

Thanks to all who attended the HUC Gamefish open on Saturday. We had close to 60 entries from as far afield as Northern KZN and Gauteng and it was well supported by local KZN spearos.

Conditions were fine early in the morning other than the cold land breeze but the low spring tide coupled with a moderate swell made for very difficult close inshore conditions (especially for shore entries) with visibility reduced down to 2 meters in the churn and most points were inaccessible due to the tide so most fish were seen along the flat sretches and sheltered side of the points right in the backline area, however the shoals of Garrick were around and a few snoek but one had to virtually swim right into them and it didn’t give one much time to line up and shoot. Viz out deep in the middle S.Coast area was 5- 8 meters which also proved difficult hunting conditions for`couta and though a few good fish were bagged on Friday by ski anglers, none were seen on the comp day.

Those that ventured out to Aliwal Shoal also found game fish few and far between but there were a few Sailfish,Wahoo and Ignobilis knocking about for those lucky to see the fish.

Jaco Blignaut scooped top prize of R5000-00 cash for a sailfish estimated (as the fish were gutted and gilled before the weigh- in) of around 45 kg followed by Ferdi Burger with an estimated 17 kg Wahoo. Carl Werner bagged himself a 15,5 kg Ignobilis kingfish to take third prize of R1500-00 cash and the consolation prizes of equipment and spear guns followed for biggest bag and lesser individual weights mostly smaller Garrick other than Donovan Solomon`s estimated 9,5 kg fish which won him a new Rob Allen  1,2m reel gun.

I was stoked with my 8kg snoek (which I `stoned` in about 1,5m depth off the point at Umfazazane and a 6kg Garrick) which won me the 1,2 carbon fibre JOHRI speargun.

I`ll compile the full list of results and email it out this week.

A hearty thanks to the HUC committee,wives and spouses and main sponsors especially Danie Swanepoel of Esteem property builders and renovators, Rob Allen/Dive Factory,Dive and Leisure (Jan and Louise Krynski),Rabitech(Louis Hattingh),Johri spear guns,C-Freaks,Aqua planet,Jaxx restaurant, our other sponsors and the Carousel resort in Hibberdene for hosting the event,prize giving and braai.

The rest of this week looks bleak until Thursday / Friday and with the high tides early in the morning I am sure there will be some Garrick shot. 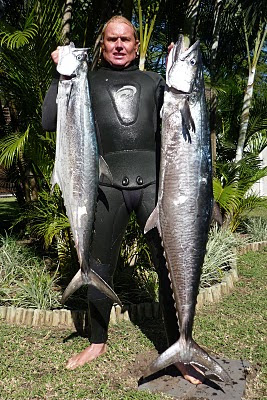 Over the last few weeks I have spent most my time diving away from home as the season has been rather disappointing here. I have dived Vidal, the Shoal and the Kei looking for some decent fish to spear. My search turned up rather fruitless.

On Friday a mate of mine Warren convinced me to do a 'fitness' dive ..... this was starting to look appealing as I have done very few shore dives lately and my fitness is starting to reflect in my diving. And there is no better fitness and conditioning than a a couple hour swim from the shore.

Anyway we headed out off one of our local spots and some how got separated. I thought Warren had swam up to a ledge further down the beach. Anyway I swam to thre next ledge and he wasnt there so I decided to hang around and do a few dives. The vis wasnt brilliant and it was difficult to find the drop off. On the one dive I missed the reef and hit the sand about 15m or so from the reef. I thought I would swim along the bottom towards the reef and maybe see if there wasn't anything chilling on the drop off.

Instead I swam into a Couta right on the sand! The vis at the bottom wasn't great and I closed in on the fish. It kept its distance and when it started to turn away I figured I was close enough to the fish and took the shot. I thought the fish was about 10kg, but when the spear took a while to hit the fish I realised that it was a decent fish. Long story short I landed the fish and was super stoked, and thought to myself the boys arn't going to believe this one!

Time was running out and by the time I landed the fish I was way down the beach and caring this beast back was not going to be fun. Next thing as I hit the back line a school of large snoek bail past. Instinct takes over and I manage to plant a spear into the tail of the small trailing fish in the shoal. This turns out to be another decent fish.

The Couta landed up weighing 21.68kg and the Snoek 7.83kg, the walk back was a little more than the fitness sesssion I had bargained for but it was all good. But most of all these two fish have restored my faith in my home reefs and I guess this is what keeps us going back out there spearfishing over and over ... especially when most the time we get blanks.

At the beginning of June a couple of us headed down to the Transkei to do some spearfishing. Mike , Cristo and myself went down to the Hole in the Wall while Jp and Mark headed all the way to Mazzepa bay. The conditions were beyond epic the water was 20m vis and averaging 22deg .... very unusual for that area. this made getting close to the Poensies ..the fish of choice there very difficult.
We did manage some good fish tho, and had some spectacular diving with the hundreds of Raggie Sharks. 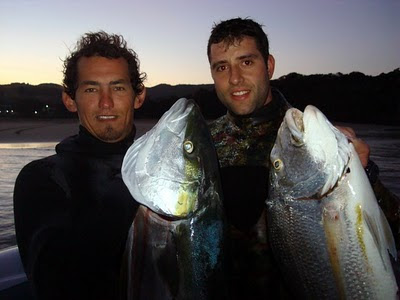 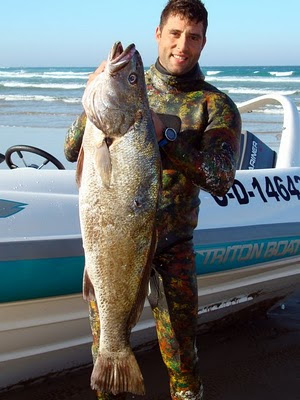 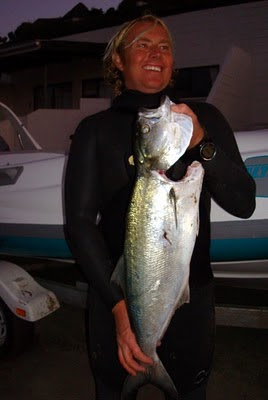 Chris - 4.6kg Shad
Mark and Jp had a more productive time and found that the undived waters of Mazzepa was the place to be. Here is the report back I got from them:

Conditions were excellent with light winds, settled seas and very clean water. The diving was mixed between the points for brusher, Kob etc, and deep pinnacles where we picked up some good ‘tail.

Strangely the 10-20m reef was very quiet, with lots of showings but mainly shoals of bait and nothing substantial. The pinnacles were amazing dives, rising from 40-35m then straight up to 22m. Inshore we dived around an incredible island – schools of brusher, kob, cracker, massive bronzies, grunter – almost everything. Sharkwise it was very quiet and limited to a few raggies, although Wonder, our topman, said a shark bigger than our boat cruised past when we were diving the island. Because the fishlife was so prolific, we could be selective in the fish we took and it was a nice change to just sit and watch the schools of brusher milling around while waiting for the big one. Sardine wise, we saw lots of action on the first day, and as we were leaving, but didn’t dive any schools. Holding thumbs they make it to natal this year! 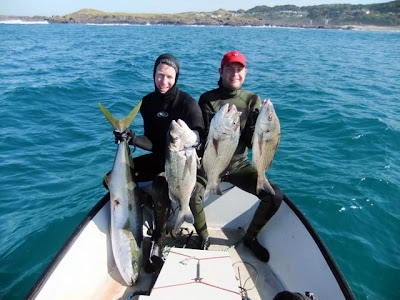 May is normally the month for spearfishing Wahoo on the Shoal. But I did not hear of too much action last month. There were 2 weeks of strange water that also canceled any chances of good fish.

Alistair from Extreme Spearfishing Encounters sent me this pic from yesterdays dive, this the message I got:

Dude, got these hoo today in almost perfect conditions on the Shoal!

Warren played sword fight with a small marlin that was swimming with 2 salies.

Basie lost 2 big hoo, the bigger one he is holding came off after a spine shot and cruised up to me and I got it!!!
Saw dorado and cuta!

You did not send me a usb cable so I can’t see the footage, will try and find one tomorrow!! Will let you know!

I spoke to him earlier this morning and there were some guys out today, but they had only one Wahoo by 10am. He also said that they had a shoal of bait fish yesterday, but the only thing swimming with it was a Great White! ...nice*

The spearfishing on the coast the past few months has been dismal, we finally now have some good vis which at least means we can get in for a dive.

With it being quiet the week before last we headed up to Vidal. That too was quiet, and there had only been a handful of fish caught over a whole week by the fisherman. We got some great pics of sharks and the guys saw a big Marlin out in the blue. Some other divers also reported seeing a marlin over the same time.

I headed out to the Bluff yesterday hoping to find some action with Ryan Bermiester and Brod Whitiker. The water was ok and it was good to do some diving. Ryan took me to some of his spots, and I have to say the Bluff has some impressive structure. the fish were scarce and we scratched around a bit. I did manage to get a good sized Mallabar Cod of 14.3kg, I almost did not get the fish as it bolted the moment it saw me.

On the bright side it looks like the sards might make an appearance and the conditions seem to be looking good for a trip down to the south coast.