That feeling when you know you missed it!

You know that feeling ..... ya the one that hits your gut? When you know you missed out?
Well yesterday was one of those, I saw the sea before dark while the tide was high and it look nice. No waves but it had loads of potential. The forcast said the wind was going to be 100's.
I managed to drive past the beach at 2.30pm the tide was already coming in and a light east was starting to blow. And guess what ...... I got that horrible feeling! 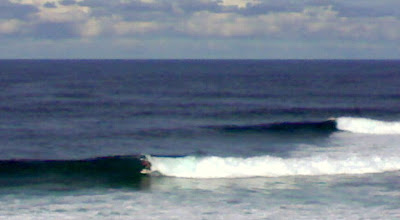 Surfers Point at Willard Beach Ballito
starting to look like there is some life in the place.

I saw some waves break on Surfers Point, something which has not happened since the storm in May. And I could see that if I was there earlier it would have been cranking.


This is the down side to winter! The waves go off ..... but generally on the low which is normally between 8 and 11am near the spring tide. And that means that I am at work!!!!


And I get that feeling alot!!


Well the wind is going to behave itself again today and with the dropping swell a point dive should be the order of the day tommorrow. Thursday brings a mild east but with some luck we will still be diving on Friday and the weekend.


Dont forget the Salty Divers Club meet on Friday. Bring your 'dop n' chop' + the wife or lady friend ..... its gonna be fun. I have some training I will be doing and maybe a guest speaker ???


Will keep you posted.