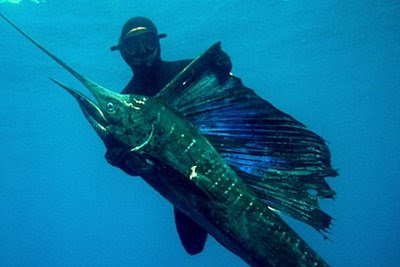 A bunch of the mates went up to Mozambique spearfishing half way through April and got back this past weekend. They had gone up to a spot that is kind of off the radar so to speak to investigate some huge drop offs.

They got dupped and the water was green, too green to spearfish in. Andy said he dropped onto the one pinnacle in over 20m and the vis was only a meter on the bottom! So he jumped back in the boat and called it a day.

The guys then decided to drive through to Barra a couple hours away, where the diving is almost guaranteed. The water was good, a little cool for up there but the vis was 100% better than the last spot.

They spent a couple days there and got some great fish. The fish weren't thick but it sounds like the guys had a jol. Craig got the fish of the trip a 38kg Sailfish and even had a shot at a Marlin!! He fought the Marlin for a while before the spear pulled. proving once again that there might not be loads of fish at Barra ..but you could always get lucky with a big one!!