Wahoo where are the Wahoo??

Just no Wahoo on Aliwal shoal!

We hit the shoal on Saturday, we knew the weather was going to be good and the oppertunity was there so we went. We were kinda hoping that the current would have already turned with the north east on its way and the south not being to hard. But the we were not that lucky, we had hoped to see some Wahoo not impossible at this time of the year, although May does seem to be Wahoo month on the shoal.

We headed out to the 19 fathom mark and it was an interesting reef, loads of good reef fish and some nice ledges. I was kind of hoping to see some Dagga ....
There was some action in terms of baitfish and the like but no game fish!

We did land up diving with some humpback whales, and some Bronze Whalers, and landed up with some footage of the sharks. But with the slightly green water the footage was a bit miffy.

Barry and Scott Paxman had a different weekend to us ...... 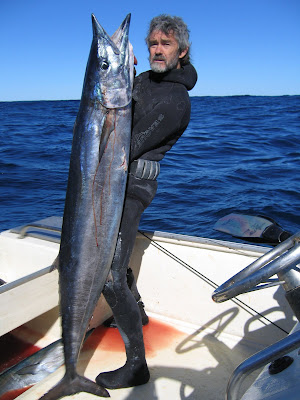 Barry Paxman with a 29.4kg Wahoo
I am sure with the Winter Game Fish at Vidal in 2 weeks some Wahoo will come out on this side of the globe. But those are great fish ...I am going to be getting all the tips I can from the Paxman's ...... they must be doing something right! 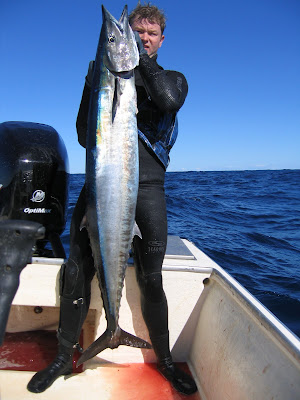 Scott Paxman with a 2okg Wahoo

The dive looks good for this week, mild weather and a light south west tomorrow should give us plenty opportunity to get in. The down side being that this time of year is really hit and miss with the fish. It can be frustratingly quiet. And then that bus Cuta ..... from out of now where! I guess thats is what keeps us in the water!!!