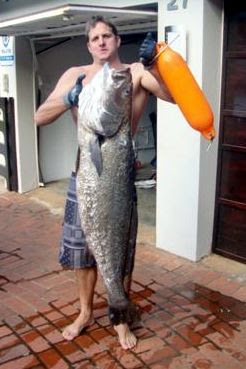 The north coast has some Sardine action over the last few days, but there has been very few reports of good fish coming out. The conditions have been fairly good so most guys have given it a go some where along the line. For the most part the odd Garrick and Snoek have been shot. That was until I got a mail with Brett Kauffmans Daga he shot yesterday off Westbrook.

This is what Darrel Hattingh has to report:

Splendid,splendid !! is how it has been this whole week. As I write the viz. is still 10-15 meter with a knee biting swell.We`ve had a great winter this year I think despite a bit of big swell and one or two weeks bad weather.
Fish have been few and far between with lots of clean watter but barren stretches though ,and it seems the gamefish are grouping in mass and following the sardines which last I heard were beaching up the north coast ?
However, I was rewarded yesterday when i jumped in off the first point north of Hibberdene main beach at around 9.30 and swam into a huge shoal of big,big snoek travelling south in about 6 meter depth - what an awesome sight in the 15-20meter viz, they were ambling lazily along in mid-water and between 60-80 fish I would guess-thought they were couta at first (could have been some sort of mass migration as last time I saw such big snoek was at Vidal in the eighties) anyway,i picked off one of the closest as they idled past,tracking it with my 1,1 freedivers railgun and popped it a good shot, by the time i strung it there were still snoek passing underneath my legs - some of them i`d guess in the 10-11 kg range as mine weighed 9 kilos !!
Saw Marc Lange who launched at hibberdene and they got some garrick and a few bottoms.
send me your reports please,let`s see what`s been happening??
cheers-
darrell

There is still a chance that the sardines will appear again ... hopefully this time with all the game fish.

No Seriously the local pod of dolphins off the north Coast area are rather aggressive. Here is a mail that was past onto me:


...have you guys received any “stories” of being molested by dolphins on the North Coast? Yesterday I went for a morning drift off the stairs at Sheffield Beach and when off the Christmas Bay point I got ‘mugged’ by a school of dolphins. It started out pretty mellow with me diving down in clean shallow water on the backline to check out the dolphins as they swam below me. The dolphins turned over as they sometimes do, presenting their undersides, and sort of nodding their heads, ‘smiling’ and looking upwards at me. I was enjoying swimming with them at close range all the while listening to them whistling and smiling back at them when suddenly the biggest one swirled out of the formation and buzzed me as a shark would. I got the fright of my diving life as it effectively somersaulted me over in its ‘prop wash’ as I fended it off. I headed for the surface a bit surprised by the sudden show of aggression and when I looked down the whole school took the big guy’s lead and surrounded me, making a heck of a racket and taking turns darting in at me. It was bloody intimidating to say the least and effectively ruined the remainder of my dive as I was continuously looking over my shoulder.

I did have a snoek on my float which I had pulled in close when I heard them coming and the one tried to pick it off while the school was working me over. I can’t help but think that this is this particular school’s modus operandi and I was wondering if anyone else has had a similar encounter.

You might think that dolphins attacking is 'bull' but I have lost more fish in the last 10 years to dolphins than to sharks off our coast.

The one time I had a large female showing her young how to out whit me ... and she did just that. Another time it was a whole pod like in Clives case, but the most intimidated I ever felt was with a big bull dolphin. I am not sure if you have ever seen Gambit at the Durban Aquarium, he is about 500kg, this chap look like this... bigger than any shark I had seen.
This huge dolphin did not try and out maneuver me and sneak up like the others. He just confronted me straight on ...and very close. I tried to push and punch but he just bobbed and weaved out the way.

Here is an interesting fact: a large Bottlenose Dolphin will eat as much as 35kg of fish a day. And at the moment there is nothing keeping their population down, so when they see your fish ...they are thinking easy meal!!

Email ThisBlogThis!Share to TwitterShare to FacebookShare to Pinterest
Labels: Dolphins 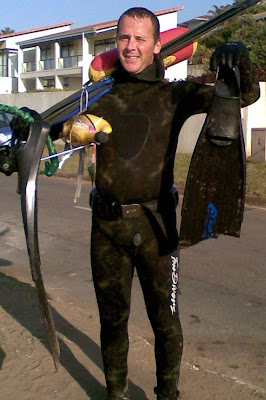 Dale with 1 time half chewed off fin!
Quinton White sent me this mail about a shark 'attack / bite' at Salt Rock on Sunday!!

On Sunday a couple of us returned to Tiffany’s only because the day before had 100’s of good size snoek. Unfortunately Sunday only had bad viz and between 5 of us only 1 couta was spotted. We decided to get out of the water, Dale, Craig and myself swam in together, I was through backline first and dale followed, once you were through back line you we were on a sand bank, I managed to get over the sand bank quite quickly, and dale was still on the sand bank 4m away from a surfer. Dale got jerked about a meter or two back wards and was under the impression someone was fooling around when he lifted his head out the water him and the surfer was looking at each other not knowing who did what, later when we tried to put the puzzle together, it cam out that the surfer thought that Dale’s fin hit him the same time Dale jumped up. The scary thing is that is was only waste deep water and we think the only culprit that it could be is a Zambezi with a reaction bite in white water. Would be interesting to send the fin to ORI and see what they say. I have attached a pic of the fin. 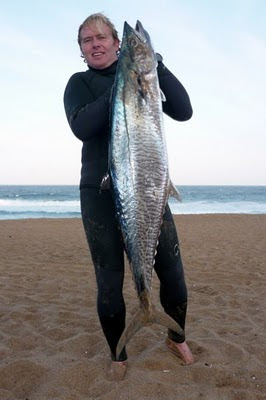 Mid Winter Fat Return Couta
Winter on the coast is the time of the year for spearfishing big fish. If its not a big Daga... you can get lucky with a fat Couta returning from the sardine shoals down off the Transkei coast.