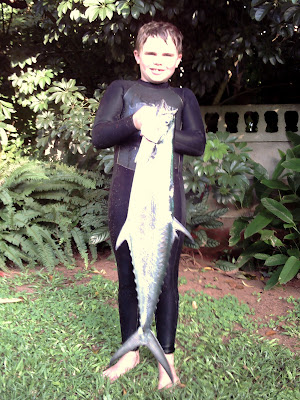 Little Champ - Braiden Coates with his first Snoek 4,28kg
Some kids get amped to watch cartoons before school, not Braidy!! He seems to be living a life we all wished we could have. I remember only dreaming of surfing or diving before school, so it is super cool to be able to take him for quick ones before school.
It does require something similar to a military operation, all the equipment organised the night before, and clothes and breakfast ready when we get back as the house turns to mayhem getting ready.

This morning was a buzz though, with every one super stoked with Braidy's fish. After the conditions and fish being so good, I had to get Braidy in there. So we got down to Boulders in Ballito at first light, the wind had started to blow so I was a little hesitant. The water was a little green, not good for filming but good for a point dive.

We headed out to the drop off on Lemon fish reef, but it was quiet. Time was running out so we headed in to the channel were the snoek also come through. And Bobs your Auntie .. a shoal of snoek come past Braiden. He sees them first and is already diving down when I see them swimming past. I manage to turn the camera on just in time to get the shot on film, his shot was a little high and the snoek spead off.

Before the dive he was complaining that the fish he shoots dont run like the ones we shoot, well this one ran right out his hands!! I managed to catch the line coming past me and gave it back to him. I gave the fish another shot, but it was not all that good so the fish was still going wild. Braiden landed the fish all by himself as I was catching the action on film. Man I was so proud!!

I can only imagine the stories going down at school right now!!!