Spearfisherman - 'Where are the Couta?' 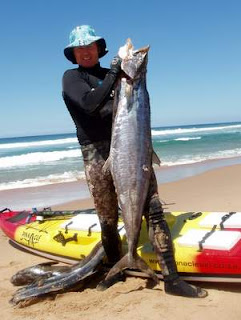 Couta Success at last - Chris Coates 20kg Couta
Sorry for not posting last week, I had my head in a hole getting the magazine done for print this week. I took yesterday off as the conditions were good and the mag was in proofing, and I got lucky with a nice fat Couta.

So where are the Couta? This has to be the worst summer season ever?? I know guys who have pushed 8 dives in a row with out getting one.  Sure the snoek are still around and you can pick up one or two in the shallows. But its the Couta we should be getting!

The seasons did seem late this year and hopefully we will see some more Couta coming out, but the norm is that towards the end of march the Couta start thinning out only leaving the odd big fella.

The Cray fish season open yesterday and for once the conditions were very good on the first day. I decided to go visit a deep section of reef further north away from the crowds, I had spoken to a very good paddle ski fisherman who had said that he had been getting a few Couta ... but all in the deep.
I got to the ref as it was getting light, my first dive down 2 Couta came in on the flashers and I got a good shot into the one fish. Somehow it came off and while i was reloading my mate rat got a nice Iggie. My next dive into the morning gloom saw me almost miss the fish. I was about to turn to go back up and saw a tail. I chased the fish and closed the gap  ... a little while later one fat boy fish was one the ski.

After that everything went quiet, I really thought that it was going to turn on! We went into the shallows and got some snoek before heading home. As it turns out not many fish came out allong the North Coast yesterday. It really is strange as everything was perfect for fish .... they just wernt there.

As per usual the weatehr has gone pear shaped ... it must be Bugg season. It looks like Monday will be our first good day this next week.