One of the local fishing forums have picked up an old thread of a Marlin that speared an Oil Rig off Angola. Interestingly enough this happen every now and then. I found this article from a month ago on Indian Ruters:

French oil company Total (TOTF.PA: Quote, Profile, Research), which operates the crude stream declared force majeure on shipments, a suspension of supply obligations due to extraordinary circumstances, but lifted it on Monday.

"It was caused because of swordfish. Now the swordfish have passed so the force majeure has been lifted," said one trader, who buys the crude on regular basis.

Girassol crude is produced from an offshore oilfield, with an average loading rate of about 250,000 barrels per day.

These are pictures of the floating load hose on the FPSO Girassol in Angola, Africa that was pierced by a blue marlin last week. Load operations were shut down for a few days while they replaced the hose. For reference, this terminal produces about 250k barrels of oil a day and this loading hose is approx 24in in diameter 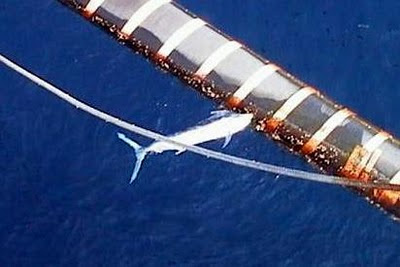 This marlin was probably chasing some Dorado or other fish attracted to the floating oil pipeline, when it hit the thick rubber. 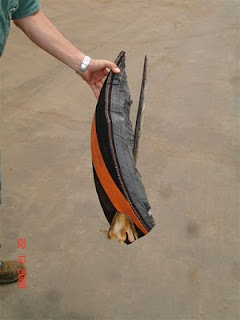 This marlin bill looks like it could be from a fish of at least 200kg, it looks longer and thinner than a Black Marlin and probably was a Blue Marlin. It must have had some serious pace to have gone through that rubber!
I also found this interesting YouTube clip of a Broad bill  Swordfish in an Oil Rig. View Here