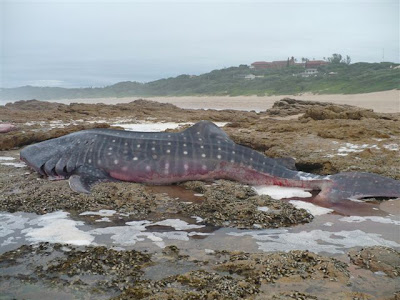 One of the Stranded Whales Sharks at Umzumbe

There has been quiet a few Whale Sharks being stranded lately, and yesterday 2 Whale Sharks got stranded on the rocks at Umzumbe beach on the KZN South Coast. I assume that it was the large swell that picked up very quickly in the middle of the day.
We had been surfing in the morning in fairly small surf, and in a matter of an hour or so the sea had jacked up to a rather solid swell. That combined with the high tide as the swell hit could have been the Whale Sharks demise. 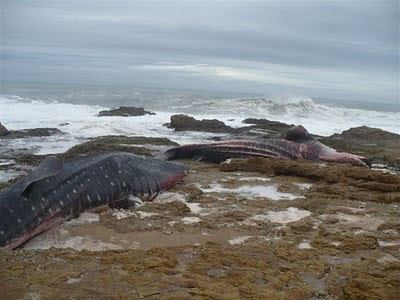 A pic of the 2 Stranded Whale Sharks

There have been quiet a few Whale Sharks stranded on the Zululand beaches, but I was reading that the authorities say that it was normal to have almost 10 strandings a year.

The sea being strange again?

saw them the evening before swimming around in the dirty water... must have been about 15 right in the bay. pity they got washed up