I got back from 21days in Mozambique 2 days ago, and have finally plucked up the courage to get in front of the PC and answer the hundreds of unattended emails.
We had an epic trip starting in Morrongulu and ending in Guinjata, And to top it off we generally only had a couple of bad weather days which by chance landed up being travel days.

Morrongulu is a beautiful place with amazing reef to explore, maybe too much tho as we spent alot of time looking for reef that had good game fish on.We did find a good reef towards the end of our stay there and Richard managed to get a 21kg Couta on one of the dives.The expanse of reef there holds huge populations of reef fish and we took acouple good reef fish on the days before finding the game fish reef.

I Shot some good fish, I got a Snapper of about 8kg and a big Purple Cod. There were some Iggies around and I got one of 20kg, but I had to wrestle him out of a cave after being reefed. This was not too much fun in the screaming current, and I hurt my lungs which put a damper on my diving for a good couple of days.

Brett and Richard also got some great fish, and on most days got personal bests on a number of species. 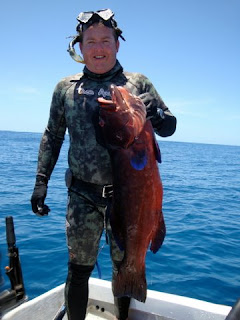 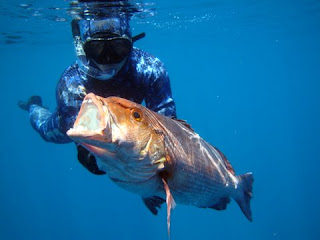 Sylvia Shoal at Morrongulu is an amazing reef and it comes up to as little as 7m, the one day we even had some surf breaking on it! We took my son Braiden and Bretts wife Lisa out for a dive and they both got great fish. Lisa shot an 11.5kg Couta, seriously not bad since that was her first fish ever! 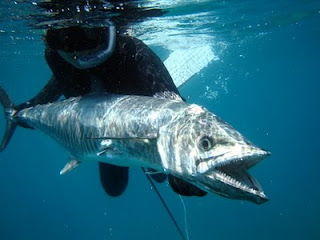 Braiden had a blast, he shot his first Kakaap and broke broke his biggest fish record a couple times with some nice Fulvies around the 5-6kg mark. His best fish was a 9.56kg Yellowfin Kingfish, which gave him a proper hiding. Pulling him under water as he was trying to keep it off the reef. 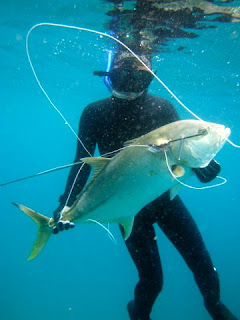 We left Morrongulu and headed for Guinjata, were we found the water was green and really not what we were after. But with after some diving we found that in the afternoons at Pindane the fish were thick and even in the bad vis we could still get good fish. 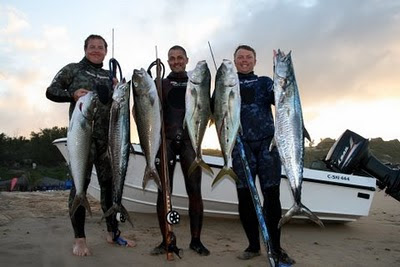 Magical afternoon spearfishing - check the size of the Kakaaps between 8-9kg! 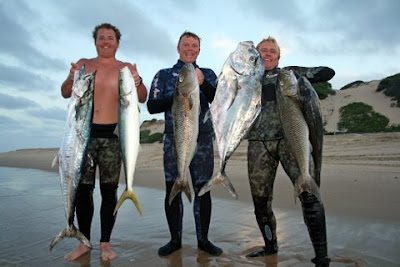 On the last diving day we woke to a south west pumping, we had planed to dive that morning pack that afternoon and leave early the next day. But when we saw the sea cleaning up in the wind we decided after much deliberation to stay one more day. We were hoping the wind would drop enough to catch the afternoon sesh back at Pindane.
The wind did drop enough to get out but the sea was still ruffled. When we jumped in the water was a milky blue and looked very fishy. A shoal of Rainbow runners came in as we were winding down the flasher I dived to have a closer look. Fortunately I did not take on as the next thing this huge marlin comes in. At first I thought it was a dolphin, but soon realised it was a marlin. I just managed to get my camera on and lined up a shot as it was turning away. I only had my 1.3 Rob Allen reelgun ... and a beltreel ...like thats going to help!

Anyway I took the opportunity and shot. The spear lands above the pectoral fin and the fish just stops and does a full flip onto its back. I went absolutely nuts, I could not believe that I had just shot a marlin stone dead ... and on a std 1.3 with a 20mm rubber. 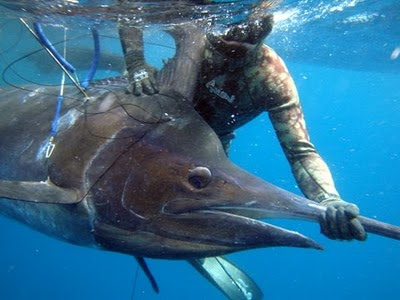 I got Brett to put in a holding shot, as I have had smaller fish slip off when the spear hits the spine, and there was no way I was loosing this fish. Landing the fish was very surreal it was super huge, it was still twitching and I was nervous that it would wake up and take me with the tangle of line to the bottom. The next thing was getting it onto the boat a 444 C-ski, this actually went surprisingly well and the fish fitted down the one side ...just! 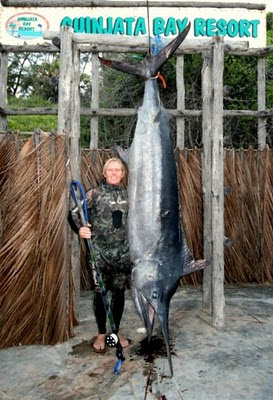 Fish of a lifetime - 228kg Black Marlin
We battled to weight the fish so we landed up cutting it in half and weighed the pieces, it did loose a lot of blood but what we weighed came to 228kg. Thats over 500lb which I was very stoked with as very few spearfisherman have broken the 500lb mark.


So all in all it was an epic trip, with some great fish and some very good footage. All we need to do now is edit down the whole lot and then you will get to see the action first hand.

Awesome fish! Well done and congrats. I think you have some realy big cahunnas for taking the shot knowing you're not rig. Well done again, I hope you savoured the moment as that's like landing on the moon, nothing else compares again.
Enjoy.

Unbelievable ! You definately had someone smiling down on you for this one. Kudos to you, you really deserve it.