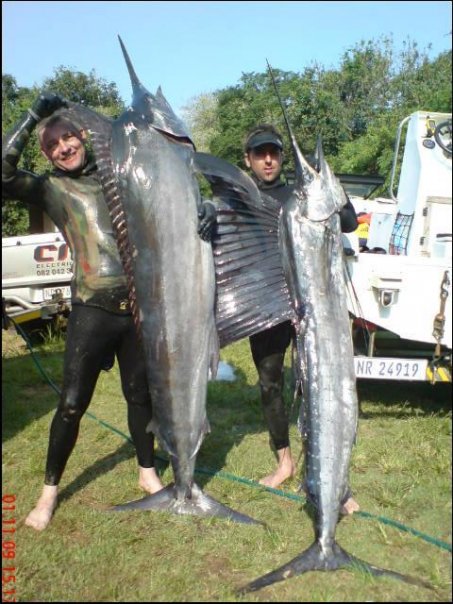 Danie 80+kg Black Marlin & Craig with a 30 + kg Sailfish Speared off the Canyon at Sordwana.

We all dream about diving a spot when its on. This past weekend was one of those for a small bunch of guys in the right place at the right time. Craig Harper was one of the guys on the trip who came right not once but twice. It has not been with out paying some dues tho, he is a committed sojourner and has loads of trips under his belt. He will be the first to tell you its not always on! Most times its a hit and miss affair.

On this trip Craig got 2 sailfish in consecutive days ..both well in the 30's. He saw a Marlin of over 200kg but could not get a very good shot so did not shoot. Danie landed a Marlin on a reel gun and Greg Audi alos using a reelgun landed a 20+ kg Couta in some very deep water. I am sure there were other fish but they did not get mentioned for obvious reasons.

I am now dreaming of it being on for me!