Evan, Morne and myself went up to Sordwana for the weekend. We stayed at my mates place there..... It was spearo 5 star!!
So three cheers for my mate...... will have to point out a fat cuta on the flasher one day in return of the favor!

The water and sea conditions were great on Saterday and Sunday, it was just a little quiet. I suppose this is the luck of the draw this time of year tho. Morne did have a go at a rather large Wahoo and I saw a small one but it was not hanging around.

On the Saterday we managed a couple fish, Evan sneaked a cuta coming up the burley trail off 5 mile. While Morne and I got a fish each off Mushroom Rock at 7mile. 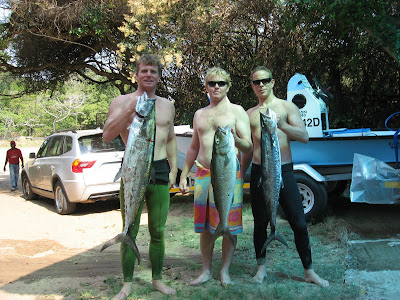 On Sunday the sea was epic, good vis and very little wind for most of the day. Unfortunately it was just quiet. We filmed some Manta rays and got Morne shooting his Fulvie which is a new Salty's club record. 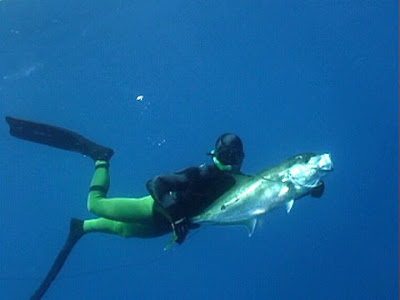 A frame grab from Morne's Fulve Kingfish footage
On the Monday the sea was a rough and we were spent from the long dive the day before so we did not dive to long. We saw a marlin from the boat and jumped in but we did not see it once we were in the water.

So although we did not get loads of fish, we dived flat out and had a great week end.